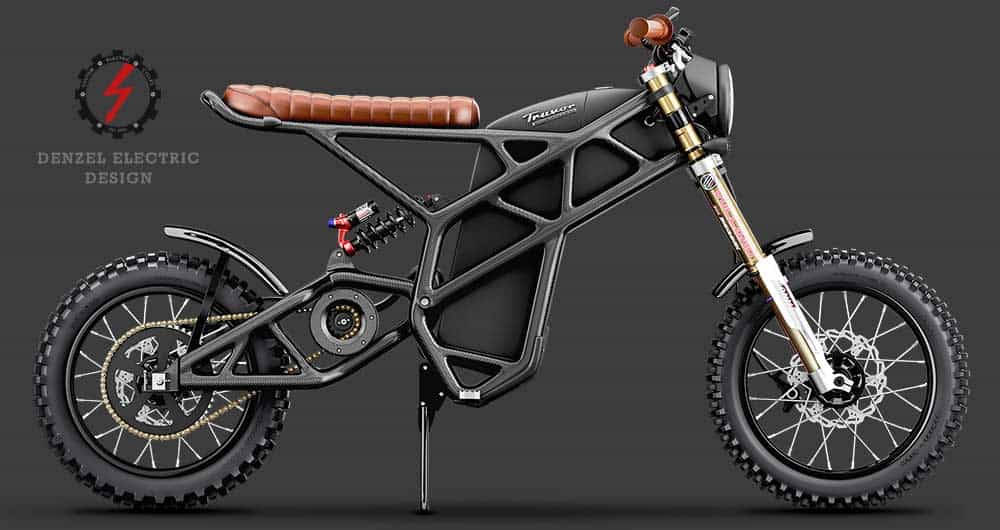 The all new Truvor carbon motor from DenzeL

The Denzel Truvor electric motorcycle was created by East Gem. They launched their Honda-inspired variants called Denzel Electric Cafe Racers back in 2017. Now there is a completely new electric motorcycle that has been implemented in the style of a scrambler.

The driving force behind Denzel Truvor was Pablo Baranoff Dorn, a designer from Barcelona.  The new model is produced from a carbon chassis with an electric drive train. Depending on the setup, the chain-driven Truvor weighs between 65 and 75 kg. There is a DNM MT200 on the front and a DNM-MK on the rear wheel. The synchronous motor provides up to 12000 W at its peak . In addition, a DECO-M 257A control is used here and the speed is limited to 5000 rpm.

Fatdaddy - The Urban Mobility Store
Trustpilot rating score: 3.8 of 5,
based on 192 reviews.

Peter Macheta
Fantastic service from these guys. They have the best stuff too. Thank you.

Fjodor Zahharov
Amazing service amazing products! Thank you so much!

klant
Good in general, experienced logistic issue but solved at the end.

Fatdaddy is the biggest e-mobility retailer for cutting edge electric rides and awesome gear. We curate on important factors like build quality, safety, brand support and the awesome factor. It's gotta be a cool ride. No boring stuff allowed.

Don’t get fooled into buying old or imported gear. We only offer the latest European models, in coorperation with industry leading brands.

Fatdaddy works with UPS, DHL and PostNL. Package tracking is included with every order. With free shipping in Europe on orders over €500!

You get 2 year carry in warranty, with 6 months on batteries. Hassle-free repairs if something goes wrong. We also have an in-house repairservice!

Our Customer Stoke-team is ready to answer all your questions. Need some gear advice? Just ask! We are available on weekdays.

Free Fatdaddy shirt on orders over €100 with coupon 'FREEGOODIES'Choose Size
+ +
Your new gear
There are no products in the cart!
Continue Shopping
0